Fictional serial killer enthusiasts can now stay overnight — if they dare — in the house owned by “Buffalo Bill” in The Silence of the Lambs.

In 2015, the four-bedroom, one-bathroom Victorian in Fayette County, Pennsylvania went on the market; six years later, the home has been converted into a “boutique accommodation” that allows guests to rent the iconic “cinematic destination.”

Thirty years after the film’s release, Buffalo Bill’s House remains largely untouched from how it appears in The Silence of the Lambs; even the same front door — where Jodie Foster’s Clarice Starling first comes face-to-face with the serial killer played by Ted Levine — is still intact.

However, homeowner Chris Rowan has added Lambs themes throughout the house, including naming each room after specific characters: “There are the ‘Hannibal’ and ‘Clarice’ rooms, and of course, the ‘Precious’ room, which features twin beds, perfect for families visiting with children,” the listing notes. The main suite is named after the home’s “owner,” “The Buffalo Bill.”

“We have been working hard to create an unforgettable experience for fans,” said Rowan. “That’s why we decided to offer the house on a private rental basis. In other words, you and your booked group alone, will have exclusive access to the house during your stay. No other visitors or guests will be allowed at the home or on the premises. We want to give fans access to this unique opportunity to spend a night or two or even a week at Buffalo Bill’s House and live out all of their ‘Silence’ fantasies.”

Framed newspaper articles of Buffalo Bill’s “accomplishments” — “Bill Skins Fifth” — adorn the home’s walls, as well as other memorabilia from the film. 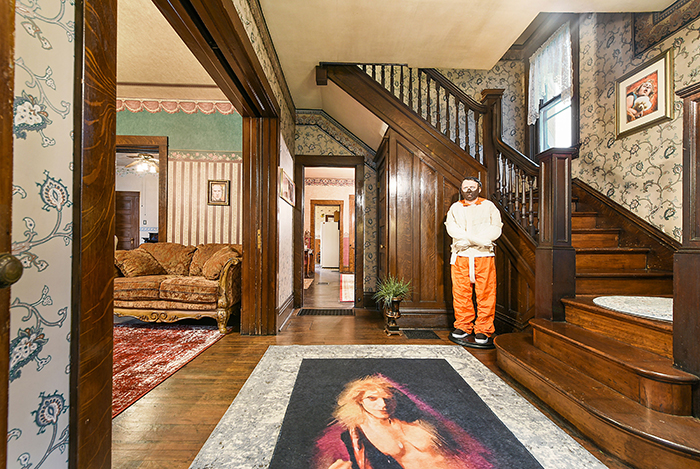 As for the basement pit where Buffalo Bill’s victims rub the lotion on its skin or else it gets the hose again, Rowan says he’s created an especially terrifying experience.

“Guests are going to be in for a real treat when they head downstairs to the infamous basement,” he said in a statement. “We have re-created what we are calling ‘Buffalo Bill’s Workshop of Horrors’, complete with vintage Singer sewing machine, disco ball, four female mannequins dressed to resemble the ones in the movie, and of course, a full length mirror and Buffalo Bill style kimono for our guests’ use, designed to help fans get ‘in the mood’ to live out their Buffalo Bill fantasies. We even have ‘Goodbye Horses,’ the haunting song that plays during the famous Buffalo Bill dance scene, on autoplay, as folks enter the basement. So, we encourage fans to put on that kimono and get their own ‘tuck’ on. And don’t forget to take and post photos!”

The attic has also been converted into “Buffalo Bill’s Playhouse,” complete with retro arcade games like Pac-Man and Asteroids as well as a large TV where guests can watch The Silence of the Lambs in the same house where the mayhem happened.

Bookings for Buffalo Bill’s House are now open at the home’s site; rates start at $695 a night for the whole house, with a Halloween weekend price surge that totals $3,995 a night.

Subscribe to our newsletter to stay-up-to-date on the latest news from Buffalo Bill’s House.

Do you have questions about Buffalo Bill’s House? We would love to hear from you! Contact information is listed below: